Church of God volunteers, namely the Church’s ASEZ university students, are at it again, this time by hosting the Mother’s Street Project. On July 16, 2017, ASEZ had 80 volunteers come out to support the cleanup, which ran the entire stretch of H Street starting on 12th Street and ending at the Starburst Intersection Plaza in Washington, DC. The title “Mother’s Street Project” come from the members’ faith in God the Mother. Generally, mothers make a lot of effort to maintain a clean and organized household. Hence, the volunteers hope to exemplify the love of God the Mother by cleaning up their own neighborhoods.

The volunteers set out to clean up at least one kilometer. Their overall goal: to eventually achieve 40,000 kilometers, the circumference of the earth. However, the members know this isn’t something they can accomplish overnight. This is why ASEZ is plans to carry out this campaign over time. 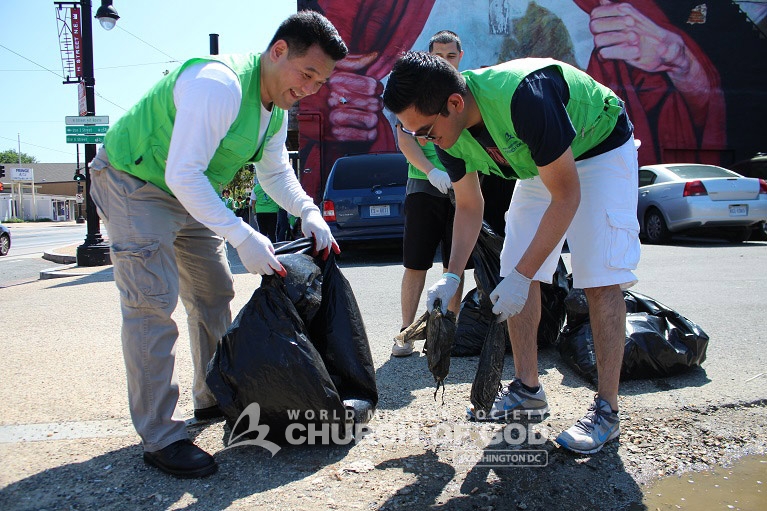 Volunteers picking up trash on H street during the ASEZ Mother’s Street Project.

The cleanliness of DC streets is an ongoing issue which the city has been struggling to completely dissolve. Nevertheless, the action put forth by the Church of God students gave the community a sense of hope. The volunteers moved up and down the street to remove trash. They couldn’t help but to work with smiles and thankfulness has they restored their city’s streets. Residents walking by praised the volunteerism put on display by ASEZ. Despite the thick summer heat, the members moved quickly to collect 20 garbage bags of litter in just a few hours. As a result, the community is one step closer to achieving clean and sustainable streets.

First District Metropolitan Police Department officers on-duty watched over the volunteers working along H Street. While ensuring the safety of the volunteers, they were surprised to see college students so active in the community. Moreover, they offered to help the volunteers for future community services.

NBC4 and WUSA9 both sent out reporters to cover the cleanup. As the first installment of Mother’s Street Project was a success, the volunteers’ efforts were broadcasted through the local news outlets. Keeping up the positivity in the community, Church members hope that more neighbors will join in upcoming cleanups in DC. To learn more about volunteering with the Church of God, please contact us.

ASEZ volunteers gathered together with police officers at the Mother’s Street Project in Washington DC.

University students and volunteers cleaning up trash during the ASEZ Mother’s Street Project.

WUSA 9 reporter interviewing an ASEZ volunteer and Church of God member during the Mother’s Street Project.