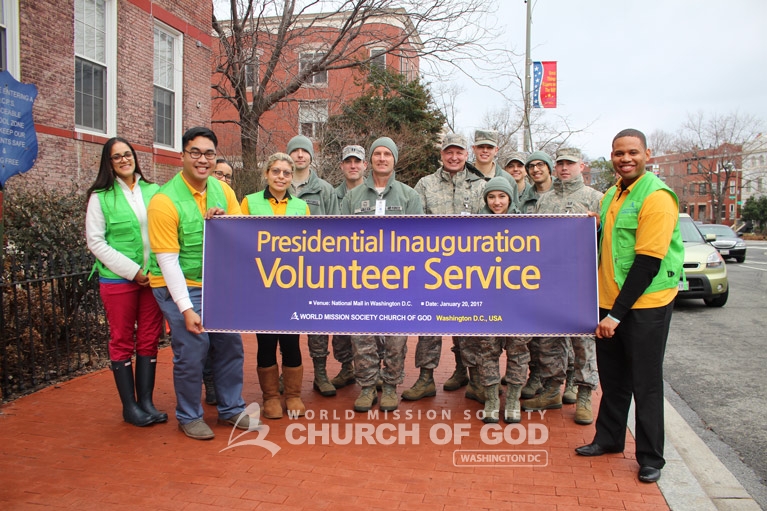 Perhaps, the most prestigious event the United States government held this year is the 2017 Presidential Inauguration. On Friday, January 20, 2017, the 45th President of the United States was officially sworn into office. This event involved more than 60 members of the Church of God. In total, they dedicated around 15 hours volunteer service behind the scenes of this nationally televised event.

The Church of God on Capitol Hill worked together with the DC Department of Human Services, DC Department of Health and the Mayor’s Office on Volunteerism. The volunteers ensured the well-being and safety of those in attendance by carrying out various functions.

Leading up to the inauguration, the members of the Church of God began training a month in advance. The first training was an introductory meeting to present the volunteer opportunities and to familiarize the members with the tasks at hand. The second training took place at the Church of God on Capitol Hill. Peggy Keller and Sharon Pellum from the DC Department of Health along with Dr. Willie McElroy and Delano Hunter from ServeDC (The Mayor’s Office on Volunteerism) led the training.

Finally, the 58th Presidential Inauguration came and the volunteers were ready to serve. Many members assisted at the warming stations scattered throughout DC. There they provided food, water and indoor comfort to the people who needed to take a break from the festivities. They helped the Department of Human Services and Department of Transportation at the warming stations as well.

Additionally, several members worked together with the Secret Service to assist the Department of Health with family reunification services. The volunteers inherited the task of helping unite lost family members, separated due to large crowds. Meanwhile, other volunteers spent time delivering food to military members on duty who couldn’t leave their posts.

The energy the members brought to each location was ecstatic. They shared God’s love, not only to the pedestrians who came in to receive services, but to the members of the government and military personnel.

“Your assistance in the DOH (Department of Health) mission of ensuring that the residents and visitors were welcomed and cared for was of the utmost importance and you performed this task exceptionally well,” said Sharon Pellum from the Department of Health.

Most of the Church members volunteered long hours (some even took the day off from work). However, it was worth the time as they were able to give back to their community while assisting the government during a monumental occasion.