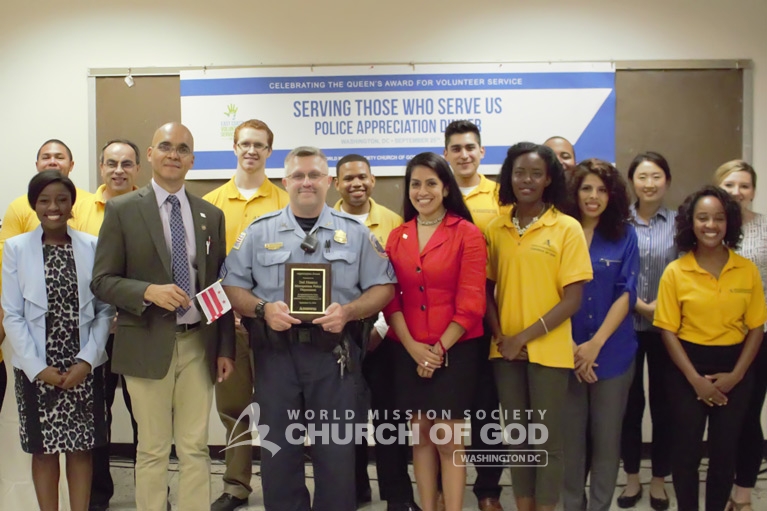 September 25, 2016, was a special day for the World Mission Society Church of God. The Church held volunteer efforts from New Hampshire to Florida, and even in Puerto Rico and the Dominican Republic, as part of the East Coast Volunteer Service Day. After recently receiving the Queen’s Award for Voluntary Service in the United Kingdom, the Church wanted to make even more effort to volunteer. Twenty-five church locations served their local communities through different events including cleanups, appreciation dinners, encouragement events, and even walkathons.

The Church of God in Washington, D.C. hosted police appreciation dinners in the Second and Sixth District Metropolitan Police Departments. Members wanted to show gratitude and recognize the officers’ efforts, who daily risk their lives in service to the community. Understanding their hard work and commitment to the community’s safety, members prepared a special dinner for the officers along with various performances. And as some officers were working throughout the night and unable to attend the event itself, additional food was prepared to share with them also.

At each of the events, the police officers really enjoyed themselves. They liked the food and smiled and laughed while watching the members’ performances. The officers happily described to members the life of a police officer and detailed for them a day on duty.

Officer Ross of the Sixth District expressed how taken aback she was with the event. “We don’t get this often, but it’s nice to know that we’re appreciated,” she shared.

Each district received a plaque of appreciation for their service from the Church of God. Sergeant Sucato and Commander Taylor were each presented the plaques for the Second District and Sixth District, respectively. Each officer conveyed gratitude and appreciation for the Church of God’s volunteer service. They also spoke about the necessity for the church and police to continue teaming together in serving the community.

Getting to know the police officers more through this event strengthened members’ appreciation for the officers. Likewise, Church of God volunteers genuinely enjoyed serving others, following the example and teachings of God the Mother. Not only do volunteers of the Church of God in D.C. look forward to actively participating in their communities but they also look forward to showing appreciation for all those who selflessly serve their communities.